We're happy and proud to announce immediate availability of Cafu 12.05, the May 2012 binary release of the Cafu Engine! 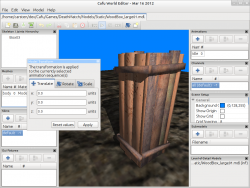 Cafu is an open-source 3D game and graphics engine. The new version 12.05 culminates three years of exciting work into a new stable demo release: It marks the completion and first release of the new Cafu Model Editor, many structural enhancements for game developers, and the beginning of our work on the next version (which in fact already has begun — we just couldn't wait).

For game developers, we cleaned up the source code, revised the code design, improved the directory layout, added new C++ and scripting reference documentation, fixed many bugs, added support for new compiler versions and platform variants, speeded up the release cycle for source archives and development binary releases, and much more.

Several hundred changes to the source code were made, see the complete changelog for details. 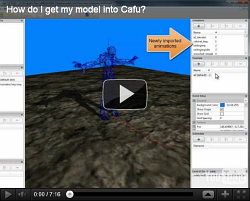 "How do I get my models into Cafu?"
It can import many file formats and provides a graphical user interface for making Cafu-specific settings and adjustments to the imported model.

For more information about the Model Editor, please see:

Documentation • Video How-To • Gallery
We'd like to thank everyone who participated in development of Cafu 12.05: programmers, documentation writers (a work in progress), and testers. We also thank our user community for the dedication and support — we needed it more than ever.

Now that this version is finally released, we are grasping the future with both hands: A new series of improvements has already been prepared, and we're now eager to implement them as quickly as possible!
Best regards,
Carsten
Top
Locked
1 post • Page 1 of 1

Users browsing this forum: No registered users and 4 guests