We're happy and proud to announce the latest release of the Ca3D-Engine: version 9.06 - June 2009 adds many new great features and enhancements to the Ca3D-Engine. 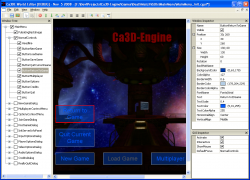 The new version introduces a new GUI Editor: A convenient graphical editor for editing GUIs for use in Ca3DE. The resulting GUIs can be used both in 2D (e.g. for the console, player HUD or the main menu) as well as directly in the 3D worlds as game elements. See the GUI Gallery for some examples - updated today!

We're very proud that in our implementation we managed to beautifully combine two normally totally opposed concepts: Our GUIs are conveniently edited in the new graphical GUI Editor and still customized in a very powerful and flexible manner by easy to understand Lua scripts.

The GUI Editor is a component of the Ca3DE World Editor "CaWE", and it employs a new advanced user interface style that is already familiar to many users from other contemporary applications. We even have extended the same user interface technique to the well-known Map Editor component of CaWE as well.

Also finished is the new Font Wizard that you can use to convert regular font files for use in Ca3DE GUIs.
The conversion is fully automatic in just a few simple steps, and the Font Wizard guides you through the process. The image to the left shows the second to last and last steps of the wizard. 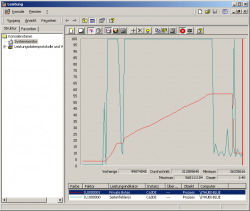 As shown in the image at the right, the new release, compared to the previous 8.09 release: Note that the last point is a small miracle: Even though we reduced the overall RAM consumption, the Ca3D-Engine now keeps another "parallel universe" for its simulations in the form of a fully enabled Bullet Physics world!
The secret behind this wonderful new feature is a very clever sharing of collision data between Ca3DE's own code (used e.g. for player movement) and the new physics simulation. In fact, this sharing is the main contribution of the new RC compared to the last about one month ago, which suffered from way too high RAM and loading time requirements.

We're also happy and proud to announce the results of our first successful adventure into the world of movies!

Click the movie thumbnail in order to get to the movie website. The movie shows some of the new physics support described below. It is available in three levels of playback quality and can be played directly in your browser. We hope that you have as much fun watching the movie as we had making it, so please don't hesitate to post your feed-back either at the Ca3D-Engine forums or at the movies YouTube page!

Support for physics simulation has been added to the engine core, using the Bullet Physics library! The current maps don't yet show many examples of it's use, but you can observe great results by shooting or throwing grenades at the large crate in map Kidney.
Related enhancements to the Ca3DE "ClipWorld" collision detection and ray tracing code yielded improvements with player movement as well, and make CaLight (for computing Radiosity solutions) up to 30 times faster!

What is the Ca3D-Engine? (A brief introduction)

The Ca3D-Engine is an all-purpose, modern 3D graphics engine and game development kit for Windows and Linux.
It can be used to create a variety of 3D applications, including games, simulations, and training and architectural software.
The Ca3D-Engine includes a comfortable 3D world and assets editor and all tools to make new games. 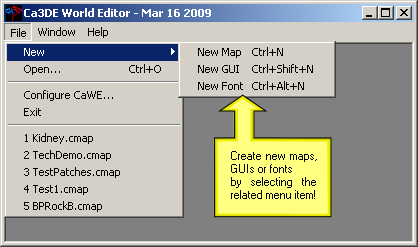 One method to open the new editors in CaWE.
CaWE-NewAsset.png (8.41 KiB) Viewed 8755 times

Its main features include For a more detailed feature list please refer to http://www.ca3d-engine.de/features

For further and more detailed information about the Ca3D-Engine, please visit the official website at

http://www.ca3d-engine.de
The website has a detailed feature list, many high-res screen-shots and of course a download page where the latest demo and game development kit are available.
If you have questions, problems or comments, you're heartily invited to join the Ca3DE forums.
You can also contact the authors of Ca3DE directly as detailed at the Contact page.
Best regards,
Carsten
Top

Quick and reliable as ever: Barely half an hour passed since we sent out the announcement mails when the great folks at gamershell.com already got the new package mirrored - our sincere thanks!

Depending on your geographical location, you may prefer to pick up the Ca3DE 9.06 file from their mirrors at http://www.gamershell.com/news/77254.html instead of the Ca3DE Download site.
Best regards,
Carsten
Top

The 9.06 release of Ca3DE is now also available from Softpedia at http://games.softpedia.com/get/Tools/Ca3D-Engine.shtml.

"Ca3D-Engine has been tested in the Softpedia labs using several industry-leading security solutions and found to be completely clean of adware/spyware components. We are impressed with the quality of your product and encourage you to keep these high standards in the future."
Read more about Softpedia and the Softpedia Award granted to the Ca3D-Engine in our separate news item.
Best regards,
Carsten
Top
Locked
3 posts • Page 1 of 1