Among Cafu's most prominent and important features are the networking code and, closely related to that, the client prediction feature. These two together implement a client-server network model that allows fast multi-player games over the internet, where the prediction makes sure that network lag is compensated for so that the game feels fast and responsive for all participating players.

Building on this basis, Cafu also implements some complementing features that further improve the client experience: Automatic interpolation is available so that also the movement, colors and other attributes of "non-player" entities get smoothly updated with the client framerate, even if they actually receive updates over the network with the much lower server framerate. And there is a broad spectrum of client effects that create a great visual experience that is entirely independent from the server: model animations are played, particles effects rendered, and so on. I've written more about client effects in my news post Server state and client effects in online games. 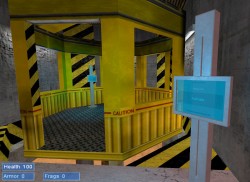 An example lift in map BPWxBeta.

However, recently it was time for a revision: When the player was riding a lift as implemented in our new Mover component, the movement of the lift and/or the (relative) movement of player itself (being pushed by the lift) was not yet ideal. Lifts are run and operated on the server, which makes them difficult to integrate with the client prediction of a riding player.
It quickly turned out that reconciliation, a sub-feature of client prediction that "smoothly" fixes mismatches of the prediction results against the server, was still missing and that riding lifts would become a perfect experience as a side effect of adding the more general reconciliation (sub-)feature.

At that opportunity, but independent from the above, I wanted to achieve a better (generic, powerful and simple) means for implementing "pure" client effects, so that game and map designers could easily add features like these (some long existing, some still missing):
Last but not least, also largely independent from the above, I wanted to clean up the client's source code. These client feature are complex, and I wanted to have them as clearly and comprehensibly implemented as possible, providing a good code design for C++ developers.

In summary, these are the existing and new features that I wanted to cover:
It had taken me a while to implement all this, but the work has turned out to be very worthwhile and successful, and has been committed already (merge commit is eea2f04 of 2015-06-18).

I would also like to summarize the main technical ideas behind the new client's code structure, but considering the length of this post, I'll rather postpone them to a future news post, coming soon.
Best regards,
Carsten
Top
Locked
1 post • Page 1 of 1