General discussion of current events, conversations with other board members, etc.
Post Reply
8 posts • Page 1 of 1

I'm curious to why when I compile the level on high ,why walls that are in shadow render blue, if it was set to normal its a lot darker

I prefer the normal setting

arfur9 wrote:I'm curious to why when I compile the level on high ,why walls that are in shadow render blue, if it was set to normal its a lot darker

It's hard to tell from the screenshot alone, but it looks as if moonlight from outside (which is set to have a bluish tint) casts through the window into the building.

The amount of reflection that is processed at the normal level may not be enough to cause this, but at the higher setting, it does.

You can check as follows, but be prepared that you have to do some typing blindly. In the in-game console, type:

This restores normal rendering. Initially it has no effect at all, but later you can easily repeat it from the console buffer by using the arrow up and RETURN keys.

Not quite what we need here, but a good start and practice. Try to turn it off again with arrow up and RETURN as described above, or type the command blindly.

After that the screen may go black and you may have to close the console blindly with ESC or F1.
With the CaLight quality set to high, the result should roughly look like this.

Ok thanks
I've noticed something strange. I seem to be getting the lightmap on the sky?

I've noticed a problem with my door, the normal must of flipped going from C4D back to Sketchup so I'll fix that


Sorry I meant I usually do rendered images, all the games I've done in the past where 2D (rendered 3D images)
Top

Thanks for posting the scene files.

The advice with forceRM("Textures/generic/_white") was a bit problematic, because the skies look wrong in this mode while they are technically fine, so please ignore seeing lightmaps in the sky.

The problem is that I cannot reproduce the lighting in your screenshot. See this image for my result after compiling your map in high quality mode: 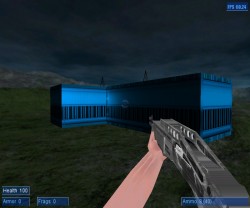 (In the inside of the building, there is no lighting from the sky at all.)

In both your and my images, it seems that the light comes from the very same direction (in the "exit direction of the door"). But in your case, it seems as if the ground is covered by some material that has lightmaps, whereas in my case it is alsoo sky, which does not have lightmaps and thus doesn't reflect any light.

In turn, as your floor reflects light, some of the reflected light enters the building through the window, causing the blue area that you see on the wall.
High quality Radiosity implementation and all that.

That makes sense, funny enough most of the scenes I've rendered in the last few years either have shadow catchers or frontal projected textures on a plane and green is a colour that bleeds (it was a terrain texture I used)
It was a lot more than I expected, I have a lot to learn about the lights
Top

arfur9 wrote:It compiles a lot faster to with the terrain texture replaced

Something else:
Please note that I've just fixed #158. This has two effects:

Cool my blundering about is helping lol
Collision boxes; I couldn't find much about them, so I just loaded pre made ones to see how they worked, I realized the door frame wasn't the right way, I think I did that first then the door.
I wasn't convinced to whether it was a bug or not, I thought maybe the door was to thin to be honest
Top
Post Reply
8 posts • Page 1 of 1

Return to “General and Miscellaneous”