Time for a cleanup?

A forum about everything related to the Cafu World Editor CaWE: mapping, editing, scripting, making GUIs and fonts, using the BSP, PVS and Light compilers.
Post Reply
4 posts • Page 1 of 1

Time for a cleanup?

I'm wondering if it would be a good idea to have a clean up of the demo maps as most have objects missing, the tech demo is really bad and you can't get to the end of it
This is what we see at the start of the TechDemo 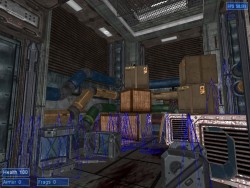 Here we should have some doors , at the bottom of the shaft the player can't move forward 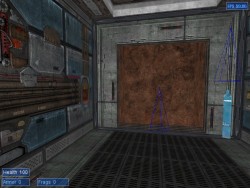 I think its a lightwave model that is missing
Top

Yes, sure! The TechDemo map is huge and has some interesting features, but it also has a couple of problems.

The objects near the start can probably all be removed. These are leftovers from when the map was first converted for Cafu, and I never got around to replace them. In fact, the most appropriate action is to just delete them.

Note that the player can well leave the elevator shaft at the bottom: A jump should get you onto the lower floor.
Nevertheless, it would of course be better to have a proper lift there. I think that a platform with handrails such as the one a bit further into the map (at the left of https://www.cafu.de/images/gallery/techdemo/pic0027.jpg) would be best, as it is reasonably simple to design (or rather, just copied) and lets the player still see the ladder and the walls of the shaft.

As a side note, I'm also not happy about some stylistic aspects in the map. For example, the wooden and carton crates in the top of the first image don't meet the rest of the map's style at all...
Best regards,
Carsten
Top

Maybe the elevator from ReNoEcho would work
Top

arfur9 wrote:it looks like the folder mapobjects is missing
Games/DeathMatch/models/mapobjects/doors/mcitydoor2l.lwo

Not quite: The TechDemo is a conversion of a map that the author originally made for Doom3 (we're using it with his permission). All the missing objects are Doom3 items that he put into the original map that we have no corresponding models or objects (such as sounds or particles) for.

I've left them all in the map in the hope to provide alternative objects/models/resources later, and of course with the intention to just toggle off the blue wire-frame pyramids until then, especially in release builds of Cafu.

Contrary to my above message, I would in fact prefer to leave them in rather than mass-delete them, as hiding them (in release builds) is simpler than recreating them later.
Preferably, unused objects should only be deleted in map areas that have explicitly been worked on.


Maybe the elevator from ReNoEcho would work

Principally yes, considering its entity setup with the elevator control GUIs. However, its textures would look misplaced in the TechDemo map, so that I would prefer a copy of the elevator mentioned above for consistency.
Best regards,
Carsten
Top
Post Reply
4 posts • Page 1 of 1

Return to “Editing and Mapping with CaWE”